Painted Waves from the Past

Erin, a fellow blogger with beautiful posts at Erin's Art and Gardens, was curious about the painted wave in my Halloween eve post so I thought I would share a little history.
Many years ago in college, I thought I wanted to be in fashion so I majored in French.  Then I decided to be an archeologist, then an anthropologist.  I just couldn't decide.  Then, when I had to declare a major a year before I was supposed to graduate I realized that the only classes that I was receiving A's was in Art ....history, painting, drawing, sculpture, etc..  So, I spent an extra year and changed my major to Art Studio.  Of course, when I graduated I had no idea how to support myself as an artist so I continued waiting tables.
Working in a restaurant gave me time to paint, but I just wasn't inspired.  I looked into teaching and graphic design.... did a few internships.  My passion wasn't roused.  I decided to take a night class in interior design and had so much fun that I stayed on and three years later, I was a certified interior designer!  I missed painting but I found a way to make money and have fun.
For about 15 years after I graduated, I never picked up a paint brush....until I met my hubby to be.  We met during El Nino when the coastal waters were like a bathtub and spent every free moment at the beach ! I was suddenly inspired to paint....the ocean.  I think this painting was the first time I touched a brush since my table-waiting days.  Then I painted another ocean-scape after we were married.... a gift to my husband for our first anniversary from a photo I took on our honeymoon in Mexico.
Haven't painted a finished picture since! 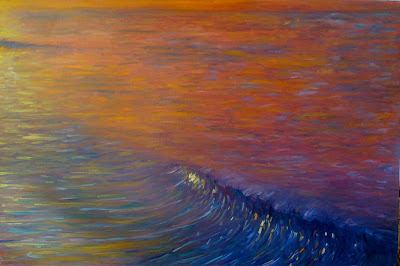 oh my!! this is a gorgeous painting, with a beautiful balance of warm and cool colors and the subtle upward movement of the wave undulating is simple and intuitive!! as a Pieces and a full-fledged "water-baby", this "wave" really resonates with me. you are a true artist, whether you are painting right now or not. i have been artistic all my life and only started painting after raising my kids....but sometimes the inspiration just isn't there....something most artists struggle with i spose.......you will paint again. i am sure of it.
erin

Dearest Penny, What a glorious painting. I really, really love it. I am sure now that whatever you touch becomes magical and beautiful.

Thank you thank you! You are all so sweet! I must admit I'm a bit of a whimp...picked up a brush in a class a year ago.... I was all thumbs. I chickened out (fear of failure?) and went back to my jewelry table! I like to think I will paint again some day...who knows what the future holds : )

So exciting your posting again Miss!
Love this painting and the "celestial" one
that is hanging over my bed! Did you even remember I have it? :)

p.s. when I move to italy you will come over and paint on my porch!!!

Penny, oh lady of many talents, this painting is stunning, the colours of the setting sun catching the wave tops is glorious! i am glad to hear you say you will paint again one day. Life takes us on so many different paths doesn't it. I set out wanting go into graphic design, side stepped into fashion & then textiles and it was my mr o who finally just 3 years ago helped me to be brave enough pick up my brushes again. My problem i think is there are sooo many things i should love to have the time to try my hand at & not enough hours. x

Hi Penny, thanks for your visit and comment. We are having beautiful weather today...clouds!!